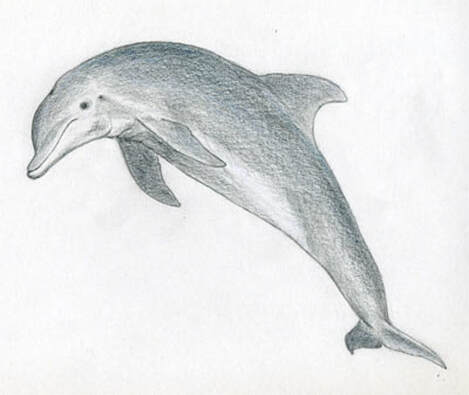 The Silver Moon Monsters
My name is Amaya Willemsen and this is my journal of my experience and research of the Silver moon monsters.
The massive flood of 2050 was likely a direct cause of the large amount of rainfall and the enormous chunk of ice that came off and caused sea levels to rise. With this flood, that left only 2 billion people in the world, over 4 billion people died in this worldwide event. The advanced technology that was created before the flood had all been destroyed, leaving the world to start from scratch basically. We don't have much advanced equipment either, we have scuba gear and oxygen tanks, but we don't have waterproof submarines that can go deep into the depths of the sea, we don’t have lots of ways to study and communicate with animals.
When I graduated college in the year 2147, I knew and everyone else knew I wanted to be an ocean conservationist, especially after learning about the massive catastrophic flood in the year 2050. I had been working in a lab, observing some infectious algae that lay in the Atlantic ocean that caused many illnesses before I got an assignement. It is now the year 2150, A lot of the animals had become extinct due to the loss of land and vegetation. A lot of food resources were gone for many animals and some animals just overpopulated the areas, which caused the smaller animals to fight for food and they weren't strong enough to survive. The animals and people that survived moved closer to the Atlantic ocean, the world dynamic shifted, things were different than in 2020. Technology hasn't really advanced too much in the United states due to the catastrophic flood, pollution has worsened due to an area of the world being much more populated than it used to be. It was my job to investigate the ocean and conserve it from getting polluted like our air.
As an ocean conservationist that studies the ecology of the ocean and its marine life, My team and I were called to Utah to investigate the silver moon monster. After people in Utah encountered the silver moon monster, they were scared and terrified, since they had never seen such a thing.Once arriving in Utah, I interviewed the man that first encountered the creature, he named it the silver moon monster. 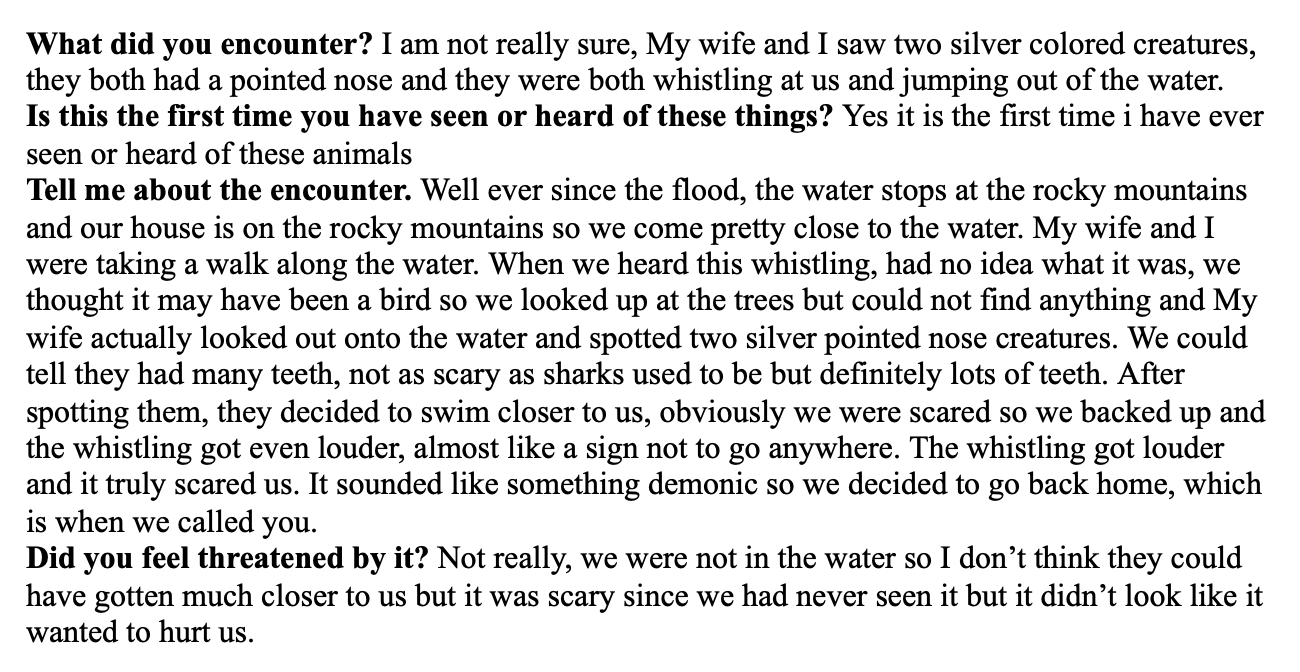 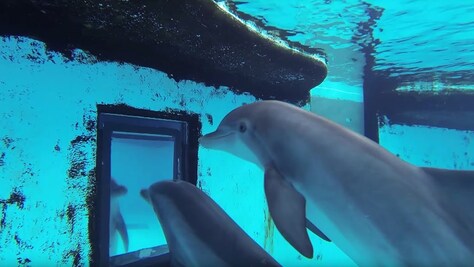 https://www.youtube.com/watch?app=desktop&v=6M92OA-_5-Y
After our interview, I wanted to encounter this creature myself. I took my research boat out onto the water to get a glimpse of these creatures. Within minutes, I had 12 of these silver moon monsters up at my boat, whistling and jumping out the water. They seemed quite curious about the boat and me. Their vocalizations sounded like laughs and maybe it was their way of communicating with me. Once hanging out with these creatures, I discovered that they have three distinct vocalizations. One of them is more of a clicking, one is a whistle that all sounds different, and then one is a whistle that has the same sound and varies with different silver moons.
After watching them, it became clear they all had their own pitch in whistles and seemed very friendly, I wanted to get up close and personal with them. Since I didn’t know their behavior yet, I wanted to be safe so I obtained an old cage that was used many years ago. I got in the cage, and the silver moons were confused with the cage, they tried and tried to open it up, by nudging their noses between the cage, very carefully. During this interaction, it became clear they are more intelligent than I was giving them credit for. I decided to free-dive with the silver moon animals and it was an incredible experience. They were swimming around me, vocalizing how they felt, they even let me pet them. I knew they were friendly and fun creatures but I wanted to know more about them.
It had been 6 months since I first arrived in Utah, during this time, I discovered that the silver moon monsters communicated with each other through sounds, each of them having a different pitch, just like humans, to know which one is speaking. They like to play with each other, which is a sign of high intelligence. After spending months with them, I believe they have begun to recognize what I look like and my voice. This made me think, can they recognize themselves and their voice? I decided to put this to the test. I grabbed a recorder and a mirror, I placed the mirror into the water and recorded their sounds. They seemed excited to look into the mirror, which I assumed was a sign they could recognize themselves. After recording their sounds, I played it back for them, and they responded with the recording that corresponds to their own noise.
​              Since hanging out with the silver moons, I noticed they were goofy and playful, they enjoyed playing with me. They enjoyed playing with my equipment and taking seagrass off the ocean floor and swimming around with it. They also loved twirling out of the water and making big splashes. It was amazing to see how much fun they could have in such a small world. They were like a tight knit family. 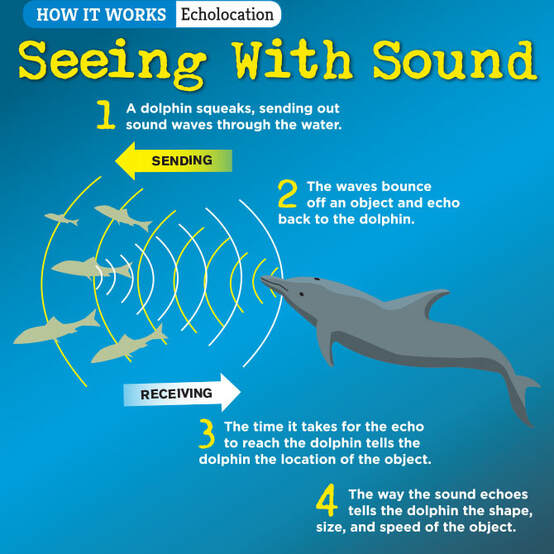 https://sn4.scholastic.com/issues/2019-20/090219/dolphins-on-duty.html#On%20Level
But after seeing a silver moon carrying a dead silver moon, I noticed the whole pod was quiet, they weren’t twirling out of the water or playing with seagrass. It seemed like the whole pod was depressed and that they had a hard time letting go and that’s their way of grieving, but that would have to be insane to put human emotions on an animal.
After a few weeks, I saw the dead silver moon wash ashore and had to investigate it. Once I dissected it, I immediately looked at their brain, which was large, and they have lots of tissue in their head, one between their eyes, and one in their jaw. I discovered that they hear frequencies by a tissue structure and the frequencies pass through this and are sent to the brain. We discovered that they have brain cells called spindle neurons that are used in reasoning, problem solving, remembering, adapting to change, and understanding. It was also discovered that they hunt, and navigate by using echolocation which has been studied in bats since 1793. Echolocation is the use of sound waves and echoes to determine where objects are in the water, they use this by the clicking sound they produce. Echolocation is a huge advantage to all species, including us humans. I observed silver moons hunt, they create a sand cloud, which disrupts the fish, they surround the fish, and then use echolocation to find where they are so they can go ahead and catch them.
Now that I know they use frequencies to communicate, I wanted to learn how I can create frequencies to communicate with them. Using data from 2013 on bats, scientists created a spectrogram of the bats calls, And found what frequency they call at. After a few years, I used that data to make a device that could translate frequencies to words. Now I can understand what the silver moons are saying. With this, I can create a device to communicate back to them with frequencies.
Once I figure out how to communicate with them, and how to transfer the frequencies to english, I learn so much more about them. They are fantastic at problem solving and love brain games. They have adapted to change like the flood, they moved to places with more fish and better vegetation, and they can communicate with other species alike. It’s a large community, much like a human community, The oldest silver moon in the pod is over 100 years old, born before the massive flood, and is probably the oldest creature from that time. This silver moon was different from the others, he was slow, probably due to old age but he had different spots than the others which were white, but his were dark and he had scars under his belly, most likely from the storm that caused the massive flood.
It was fascinating how he had been alive this long, I had never known an animal to live this long, especially after most animals went extinct after the flood. I wondered how many other 100 year old silver moons there were. It was crazy to see how much he evolved and adapted since then and I wondered if there were more ones alive in other parts of the ocean.
After discovering that they can problem solve, communicate and use echolocation, I decided that my time in Utah was done and it was time to go do my research elsewhere. It was a sad goodbye, after hanging out with these animals for so many years, it was like they were my family. I think the pod could sense it was goodbye, they were calm and gave me sweet little kisses on my mouth, they most definitely knew it was goodbye. I hope they remember me for years to come, as I will remember them for a lifetime.
Resources:
https://www.youtube.com/watch?v=KTShFMlFFBc
https://us.whales.org/whales-dolphins/how-do-dolphins-communicate/
https://www.vallarta-adventures.com/en/blog/how-do-dolphins-communicate
https://www.worldanimalprotection.org.au/dolphin-faq
https://www.nps.gov/subjects/bats/echolocation.htm
400 × 337
https://sn4.scholastic.com/issues/2019-20/090219/dolphins-on-duty.html#On%20Level
https://www.youtube.com/watch?app=desktop&v=6M92OA-_5-Y
https://blog.padi.com/2019/04/12/dolphin-echolocation-can-humans-learn-this-superpower/